Bitfury Surround says it is about to provide a platform that can take all your data, attach it to the blockchain, and standardise it.

Then, you can look at this vast, interconnected set of data and figure out, for instance, the money you’ve not recovered, and who you need to get it from. Or figure out who to market to better, and on which platforms. Or anything else.

And you’ll be able to do this with anyone else’s data too.

Bitfury Surround’s CEO, Stefan Schulz, speaks about the power of the blockchain with a zeal you only
really see in true crypto-aficionados: a desire to explain how this technology is the future of the music industry, and how it’s happening right now.

Schultz has two specific challenges: explaining in simple language how a notoriously complex piece of technology works practically for the music industry; whilst convincing that same industry to completely upend a hundred years of practice around how its data is shared.

Music Ally asks him to explain it for what must be the thousandth time and he responds with a mixture of good humour and passion.

“There is a discrepancy between the data economy and the copyright sector. Of the top 500 companies in the world, 75% are driven by intangible assets – patents and content. The entertainment world is undervalued when it comes to monetisation of data,” he says.

[Actually, the percentage may be higher: financial services group Aon claims that 84% of the value of the S&P 500 index of companies is from intangible assets]

What is Bitfury Surround?
Surround, he explains, is a vertical platform built specifically for the music business, and it rests on the bigger, agnostic Bitfury blockchain system.

Surround simply “provides the tools to restructure the management and commercial collaboration layer,” of the music business’ data.

Bitfury creates platforms for private companies to take advantage of blockchain technology. It have a suite of technologies, including a blockchain-as-a-service division that allows companies to build the blockchain into their business, a platform that processes cryptocurrency transactions – and Surround, which brings these other technologies together specifically for the music industry. It’s hard to discuss Surround – or any business that is attached to a blockchain – without gingerly trying to explain the technology behind it. It’s also useful to keep it as brief as possible – so here goes…

The blockchain part of Surround secures, permanently, the “truth” of music’s metadata: once a song belongs to an artist, this information cannot be changed unless they choose to do so. From that point, any data connected to that song – stream numbers or royalties for instance – can only be connected to that song, and only the owner knows which data connects to their song.

A very simple way of describing it is as a giant spreadsheet of songs with verified correct information that can’t be fiddled with, and with endlessly-updating columns of new data next to each song.

Surround promises this technology at scale and with security. The music industry can plug any number of data sources into Surround – metadata, royalty data, sync use data, social media data – and labels, catalogue owners, DSPs, or other third parties, can build apps on the system to do whatever is needed with that data. 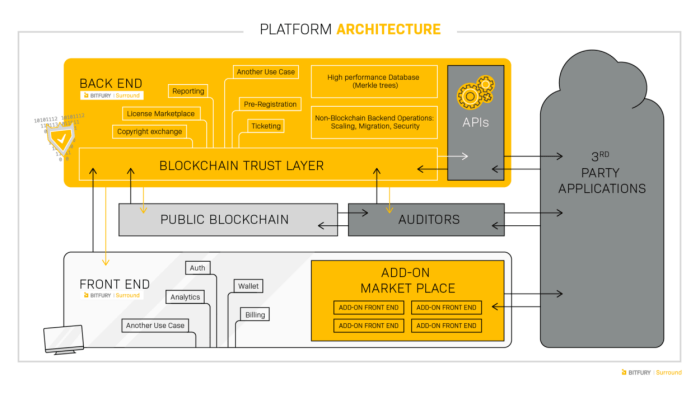 The main issue, says Schulz, is that it’s still so hard to know in the music industry which data is correct, and then to connect it to other data. Schultz says that by, “providing an open data layer that cannot be manipulated and that provides one single source of truth, collaboratively managed and respected,” the music industry will experience, “a massive change from the bottom-up.”

What problem is Surround solving?

Schultz – who has a long background in building digital products for the music business for, amongst others, Vivendi Mobile Group and UMG, and more recently, monetising “intangible assets,” – says that today’s music industry is not built to capture the full value of its assets. Artists, he said, “are outsourcing their IP for 150 years [of copyright] into an inefficient system.”

“So we solve this by giving them a platform where they can securely manage the assets and interact commercially, where you can grow and at the same time optimise workflows. And it’s totally open.”

He says that despite the complexity of the technology, people generally understand the possibilities immediately, because, “the music industry has an asset class lacking in the commercial infrastructure to allow people to maximise the value of their assets. Everyone understands that. The systems in place right now are so complex. For each party in the industry, their data system is clear, but from outside it’s complicated.”

Essential to Surround is the ability to prove ownership, because then all other data connects to the rights holders. Once ownership, data streams, and contracts are all connected, Surround becomes a dashboard where opportunities for new monetisation of the IP can be spotted.

“If you put the data in sync you have transparency of what’s happening. In the music industry, you never have a clear picture. This information cannot be processed until it’s all together. It needs to be tracked and traced and then it makes sense.”

“Making sense of data is super important. The commercial aspect is also currently completely out of the hands of the industry: why is there no digital scarcity of anything? It’s irrational that we only have one price point in digital: we used to have a hundred price points for physical sales. The current industry has no answer for that. It is economically nonsense.”

Schulz points to the past, where multiple competing parties collaborated to make a lot of money. “There are no supply and demand rules active in the industry around pricing, scarcity and collaboration. The business was accelerating when it was selling compilation CDs. K-tel and companies like them were a layer that could bring hits together, and they sold millions at a price that people liked.”

What are the commercial opportunities here?

If you’re wondering how you could possibly start to connect all this data before you find new commercial opportunities, Schulz explains how Surround already has apps that plug into the platform which does both.

“An owner of a catalogue would first secure their assets and run through a clear detailed KYC (Know Your Customer) process to secure their identity, so that they can’t be changed. It’s like an open book that says, ‘I own all these things’. And this book is not static – it’s constantly updating and you can see the updates in real time across all the data sources. You then provide more information for the system so that it gets better.”

Surround then offers tools to close the gap – between, for instance, reported usage of a song and accounting. Anyone using Surround can build tools to plug into Surround that do that – or anything else.

Schulz describes a company that makes an app that cleans up your data, and another that can analyse your data and offer advances in real time. And you can analyse other people’s data too.

“That’s the innovative part. Everything that is secret stays secret, and whatever you want to be seen can be seen. I would never understand who you are, or what the copyright or song is, but I can learn from the data,” he says.

“That’s impossible right now. So someone at a label could look at lots of data from other labels, but not know who it is, or see sensitive data.”

It’s this idea – taking anyone’s anonymised data on the blockchain and slicing it any way you like to learn from it – that will make some eyebrows leap upwards. For an industry that carefully guards access to data, this may sound too radical to comprehend.

Schultz is describing not just a technology change, but a culture change: to access this automated data panacea, rights holders need to be able to see each others’ anonymised data. For Schultz, it’s a no-brainer: “Why not use the opportunity of collaboration to provide much more business?”

Is this too risky to work?

What would he say to the sceptics who see this as too risky? Surely someone could try and backwards engineer a set of data to figure out who it belongs to – and then they would have non-anonymised access to, say, a label’s data?They’re missing the point, says Schulz: any chance of managing to crack the anonymity of data on Surround’s platform is infinitesimally
small (he claims he can say “with 99.999% accuracy that data is safe”), and that the industry should open its eyes to the risk of the data it holds now being hacked by conventional means.“Your data is not safe as it is today. I’ve met hackers…” – he pauses to reach for the right emphasis – “…they know everything. What you can know is that you are fully exposed today!”

In his view, blockchain technology offers an opportunity to unify data, record things with clarity and openness, and automation of what are currently inefficient and slow systems. It sounds ideal – so surely with all these benefits, the industry at large would be desperate to implement this system. So what is slowing the industry down? 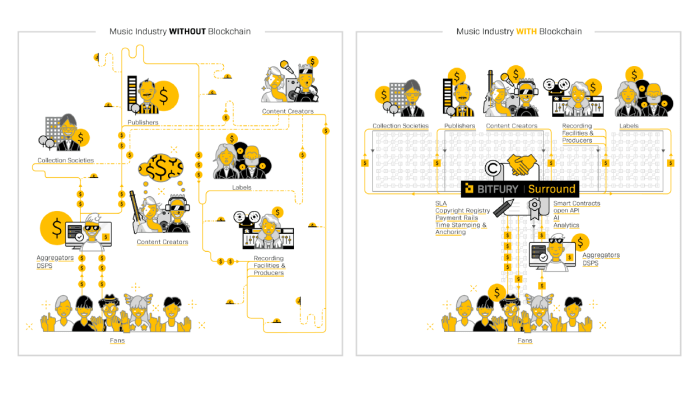 “Two things: fear and protection. They are protecting their legacy – the bonuses and incentive schemes inside the industry are not incentivised to embrace change. The other thing is the uncertainty of privacy – ‘how can I give my data away?’. It’s understandable – but if you ask what they do with that data, they’re not sure how to deploy solutions themselves. That’s why we have built a bespoke music industry layer.”

“Then there’s some concerns about the legitimacy of the system: this whole crypto-space has been the wild west, and people are afraid of that. But the wild west is the beginning of something good.”

Schulz says Surround’s underpinning, agnostic blockchain tech is safe: “Bitfury is well positioned: we have the highest security of information in the world in our infrastructure. We have a proven team. If you compromise security, the company is dead.”

Music Ally spoke to Scott Cohen of WMG last year and he said: “WMG is, ‘all-in’ with ‘many proof-of-concept projects underway, including with BitFury’s Surround’” – so what’s happening there?

Schulz wouldn’t give an exact date of when Surround will launch, or give details of specific partners, but said that, “we are feeling big enthusiasm [in general]. There are plenty of reasons why it makes sense to look at Surround. Scott, like many people in other majors, is a very innovative person.

“We all have plenty to win if we apply this technology. There are obvious areas in which the market today is kind of trapped – a lot of exploitation that is unregistered. You have a big hole in the secure identification of copyright, holes in the interactivity between players, causing delays and friction, and you don’t have the data security today to put in perspective how exploitation, creation, allocation and attribution correlate.”

“I want to positively connect everyone to solve large issues in the industry. We are agnostics. We will not take an active role in how it plays out. That is super important to understand. The market needs to do that. We just provide the tools. And they are really powerful.”

If the future Schulz is describing – where huge data sets are connected seamlessly and pored over to identify thousands of tiny unexploited opportunities – sounds complex (or even uncool), consider the labyrinthine processes that have grown, piecemeal, over decades into today’s music business.

Or systems that struggle to communicate with each other, often within the same business. If a new, clearer, reliable, safe system could be built, wouldn’t you want to at least try it out? Or, as Schultz puts it, “instead of everyone suing each other inside a value chain, trying to get a bit more of the cake – the problem is that the cake is too small. We need another cake!”