The cryptocurrency market was a mix of red and green this week amid the 2020 United States presidential elections. Major digital assets like Bitcoin and Ethereum rallied massively. However, some selected altcoins suffered major retracements, including Monero (XMR), Crypto.com (CRO and Huobi Token (HT).

Joe Biden emerged the winner, becoming the 46th president of the US. There has been little market reaction to the news, perhaps because it is a weekend. This article highlights the three biggest losers of the week and what is expected of them in the incoming sessions.

XMR/USD was recently rejected at $140 after an impressive recovery from September’s support of around $74. A descending parallel channel has highlighted the decline in the last couple of weeks. XMR appears to have found formidable support at $110, hence the ongoing rebound.

The path of least resistance is upwards at the time of writing, reinforced by the Relative Strength Index (RSI). If buy orders increase, Monero will likely extend the bullish leg to the 50 Simple Moving Average. A breakout above the channel could lead to gains targeting $140.

It is worth noting that the bullish narrative will be invalidated if XMR resumes the downtrend below the short-term support at $110. Extended losses would seek refuge at $95 before XMR/USD reverses.

Crypto.com Coin recovery in the offing

Crypto.com Coin dropped significantly after its debut in August. The downtrend has become unstoppable, with several buy signals invalidated in the last two months. At the time of writing, CRO is trading at $0.0735 amid the hunt for credible support or bottom.

The Relative Strength Index suggests that a recovery is in the offing, especially after bouncing off the oversold region. If buying pressure behind the token increases in the coming sessions, CRO would rush to the 50 SMA before extending the price action to the 100 SMA. 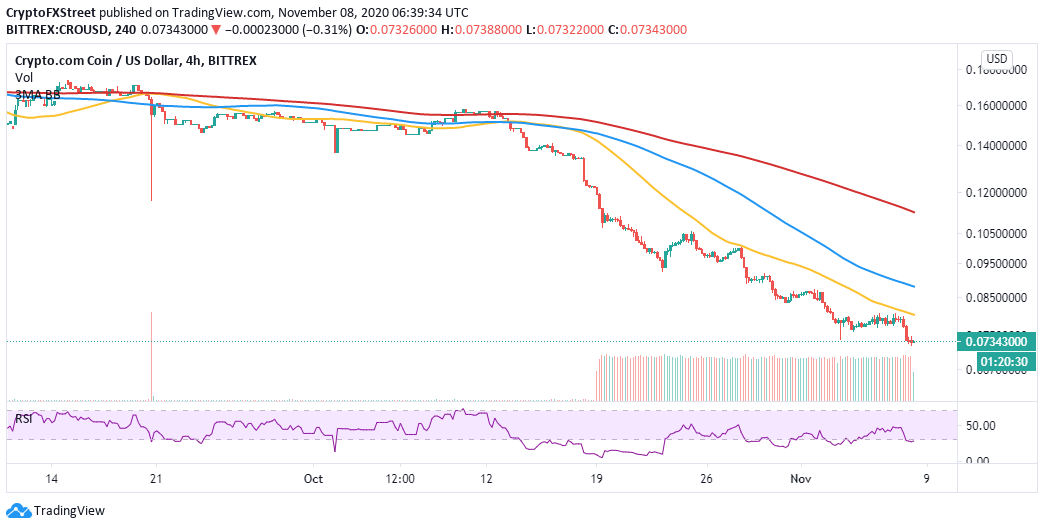 The hunt for a bottom will continue if the CRO downtrend resumed below the immediate support. Consolidation is expected to take precedence in the near term, delaying the expected recovery. Moreover, rejection at the 50 SMA might encourage more sellers to join the market, pulling CRO to the next support target at $0.06.

Huobi Token recovered remarkably from the recently established support at $3.35. However, a sell signal presented by the TD Sequential indicator on the 4-hour chart absorbed the buying pressure, cutting short the price action under $4.

Currently, HT is changing at $3.75 while dealing with the selling pressure at the 50 SMA. A rising wedge pattern hints at a possible retreat back to the support at $3.35. 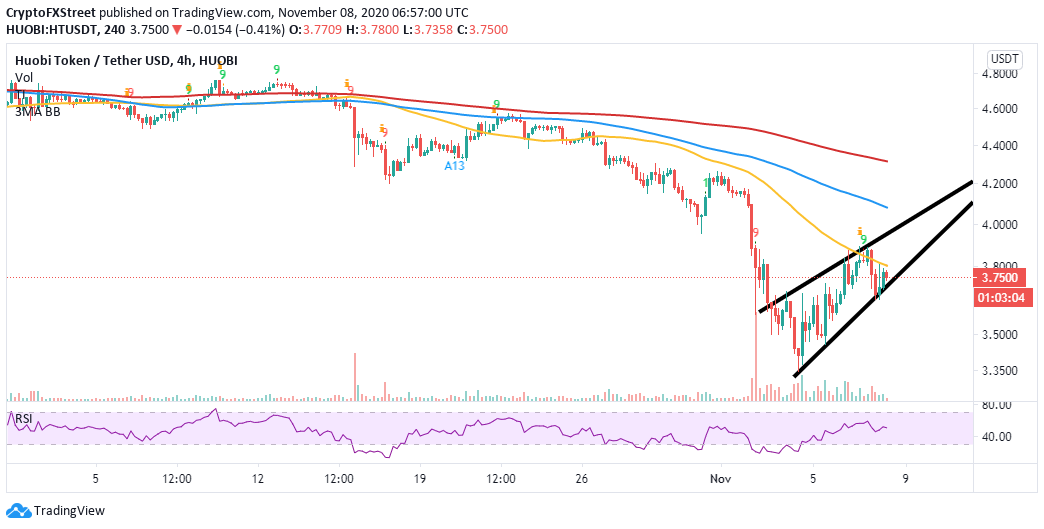 It is worth mentioning that the sell signal will be invalidated if HT breaks above the 50 SMA. A recovery is likely to come into the picture with the upside targeting the 100 SMA, slightly above $4.