Once Ripple was identified as the incumbent to a brave new world of practical cryptocurrencies. Speculation was rife that Ripple’s XRP coin had the potential to overtake Bitcoin in terms of usage and utilise its swift and cost-effective transaction framework to take the world into the future of practical digital currency.

By the end of 2018, Ripple Labs developed xRapid, a feature that promised to further speed up XRP transactions, leaving leading cryptocurrencies like Bitcoin and Ethereum in its dust. There was widespread excitement for the future of a practical, useable cryptocurrency.

With Ripple, no longer would we see crypto as an investment, but as a practical currency to use in order to buy a coffee in the morning on the way to work.

Two years is a long time in the world of cryptocurrencies, and today Ripple along with similar low priced coins like Litecoin and Monero faces a fight for its existence from a new and emerging threat. Stablecoins have well and truly arrived, and they’ve already set about enveloping the crypto market.

Stablecoins behave similarly to traditional cryptocurrencies, however, their values are pegged to real-world assets like the US dollar and gold. This means that they can exist in an environment where their values aren’t driven by speculation and each coin can be traded for a price that will remain consistent into the future.

Typically stablecoins maintain a value close to that of a US dollar.

Today, the stablecoin market is booming. There are multiple reasons for this, and the most simple explanation is that adopters are looking to use fiat-pegged tokens to look after their wealth as financial uncertainty driven by COVID-19 affects global fiat economies and the volatility of traditional cryptocurrencies alike.

Another more significant and more complex reason is due to the boom in DeFi (Decentralised Finance).

DeFi has enabled businesses to broker smart contracts and insurance deals through binding, blockchain technology that’s secure enough to be undertaken without the need of banks, lawyers, or any other intermediaries. 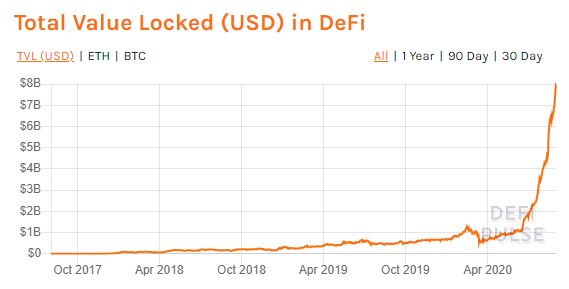 As the chart above illustrates, the total value of assets locked in DeFi has rocketed from less than $1 billion at the turn of the year to over $8 billion today – and the figure’s still rising.

Stablecoins are popularly used in liquidity pools for DeFi protocols, and as DeFi was undergoing its surge in value, stablecoin market caps were steadily increasing by $100 million each day. 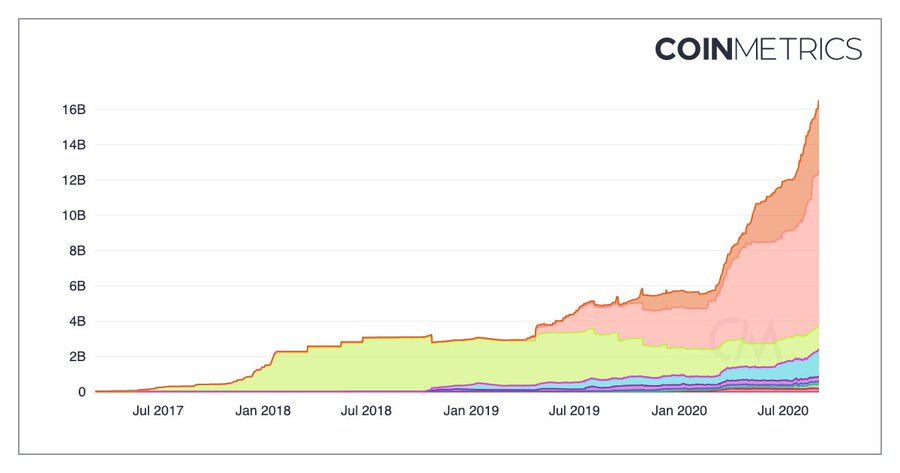 Stablecoin market caps, spearheaded by the dominant Tether (USDT) have rallied towards more than doubling in value, from less than $6 billion in January 2020 to over $16 billion by the end of August.

It’s clear that stablecoins are evolving beyond their former trading asset usage scenarios and are now increasingly being utilised as an effective tool for transferring value.

Today, there’s no shortage of corporate behemoths and central banks that are looking to get in on the act and release their very own stablecoin.

However, with their transition towards practical and sustainable payment options, stablecoins pose a significant existential threat to Ripple, and its intended business model.

The Battle For Relevance

Due to the affluence of the organisations looking to weigh in on the stablecoin market, and owing to their practicality for daily usage thanks to the fact that their values are pegged and thus immune to extreme fluctuations in price, there’s a significant concern that Ripple could lose out.

However, Ripple’s Senior Director of Global Operations, Emi Yoshikawa refutes that XRP is competing directly against existing digital assets such as stablecoins and the coming Central Bank Digital Currencies (CBDCs).

CryptoGlobe reports that Yoshikawa rejected suggestions that Ripple and other traditional cryptoassets would struggle to remain relevant after the stablecoin and CBDC boom, claiming that Ripple remains a “bridge asset in international settlement,” as opposed to a direct competitor with stablecoin frameworks.

Rather than seeing XRP as a competitor to central bank currencies, Yoshikawa believes that Ripple would rather complement these currencies, forging a synergy in response to issues in liquidity.

The end of Ripple has been speculated upon for well over a year, when JP Morgan Chase announced that it would be releasing its own cryptocurrency. Today, more competition in the form of Utility Settlement Coin Project, spearheaded by UBS, Barclays and Nasdaq threaten to utilise their vast resources to develop more convenient payment technology, leaving Ripple behind in terms of their existence as a superior payment processing coin.

Ripple may have the advantage of being the first of its kind in the crypto market, the blockchain payments company is now having to face scores of new competitors that can promise vast resources and stable values. The vast list of competitors include some of the world’s largest financial institutions.

There’s even the prospect of Facebook’s shelved Libra Project springing back into life in the coming months and years to further complicate XRP’s fight for relevance.

However, Ripple has always been resourceful, and their vision of delivering convenient payment options into a cryptocurrency marketplace that was already beginning to get carried away with speculative values shows a willingness to innovate and go against the grain. The rise of Ripple also helped it to onboard over 300 customers along the way.

Despite billing itself as more of a complementary presence in the world of digital finance, Ripple will be facing a fight for prominence in the face of some of the most affluent institutions in the world, but fortunately for XRP, it’s no stranger to innovation – and there’s always a chance that the cryptocurrency that was once tipped to become more prominent than Bitcoin can show its adaptability once again.

Subscribe to get your daily round-up of top tech stories!