Vitalik Buterin, perhaps the most critical voice among Ethereum‘s leaders, once again spoke out against yield farming in the DeFi sector. Since the beginning of the “DeFi fever” Buterin has questioned the sustainability of the market. However, investors continue to pump money into it, with the total value locked (TVL) in Ethereum’s DeFi sector reaching a new all-time high of $9.03 billion. In the last two days alone, it has attracted $2 billion.

While Buterin admitted that he is far from being “DeFi’s smartest mind,” the inventor of Ethereum also said that he will stay away from yield farming. At least, Buterin said, until it becomes a sustainable ecosystem. Buterin’s biggest criticism was directed towards the token economy.

Some of these tokens are issued as governance tokens to empower and encourage community participation. Year.finance’s YFI token has received particular attention after exceeding the price of $30,000 before Bitcoin. From the point of view of the co-creator of Ethereum, these tokens are being printed non-stop like fiat money coming out of central banks:

Seriously, the sheer volume of coins that needs to be printed nonstop to pay liquidity providers in these 50-100%/year yield farming regimes makes major national central banks look like they’re all run by Ron Paul.

A member of the crypto community suggested to Buterin that he see the issuance of these tokens as equity. In other words, as a means for the companies or developers behind the protocols to obtain cash flow. However, Buterin denied this because of “the lack of strategy” they show for generating sustainable fees:

And so far the only strategy toward generating long-term fees that I see is some kind of weird financial attack to grab liquidity and steal network effect from Uniswap. And I’m pessimistic on that strategy.

High fees on the Ethereum network could impact DeFi sector

Ethereum’s inventor also referred to a problem that could precipitate the downfall of the DeFi sector, namely the high fees on Ethereum’s network. Due to the increase in network activity coming from this sector, fees on the Ethereum network have reached new historic highs.

Data from EthGasStation shows that, at the time of publication, the standard fee for validating a transaction on the Ethereum network is 439 Gwei. At the same time, data from Glassnode reveals that in less than 1 hour, Ethereum miners earned $500,000 in transaction fees. As can be seen in the graph below, Ethereum miners earned $113 million in transaction fees in August. Four months ago, this figure stood at $3 million. In comparison, Bitcoin miners only earned $39 million in August and thus 3 times less in fees. 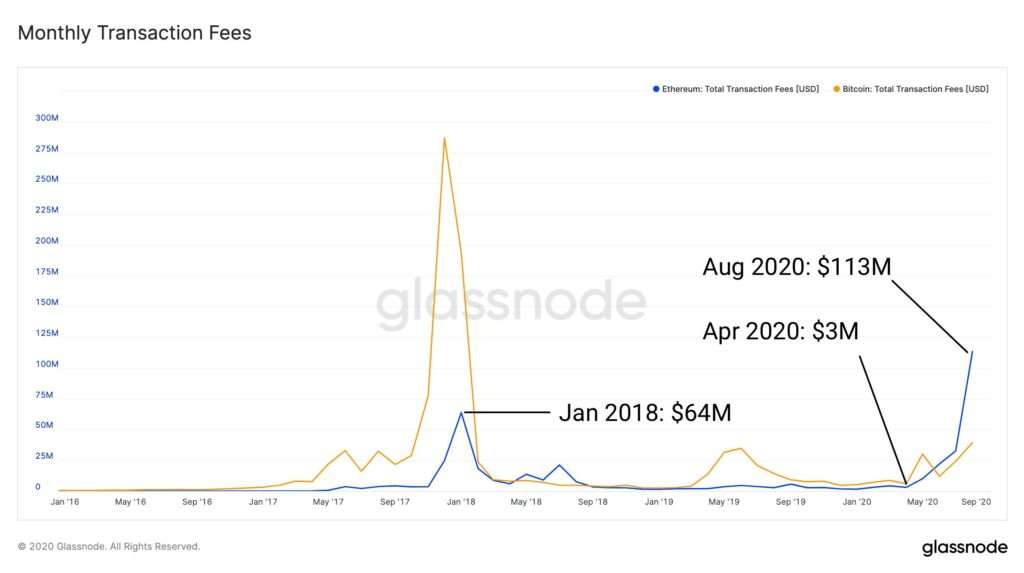 In that sense, Buterin proposed some alternatives to make a more efficient use of gas on Ethereum network. Highlighting the ease of use of these alternatives, Buterin stated the following:

To those replying with “gas fees are too high”, my answer to that is “well then more people should be accepting payments directly through zksync/loopring/OMG”. Seriously, scaling to 2500+ TPS for simple-payments applications is here, we just need to… use it.